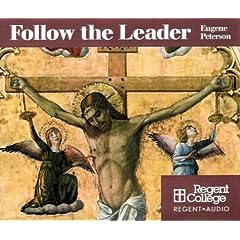 As some of you may know, there are few writers, teachers and thinkers that I appreciate more than Eugene Peterson. His a prolific writer and a very profound thinker.

At the end of the first lecture on Herod, Peterson participates in some question and answer. And this is where you get some really great, off the cuff, as well as thought out Eugene Peterson on various topics related to the lecture.

Here is my favorite exchange. Powerful stuff. Great reminder of what it means to follow Jesus.

You had mentioned that Herod was successful in his own way. His style of leadership was successful, he brought peace and prosperity, relatively speaking, to Palestine. What sort of fruit should we expect from following Jesus’ way of leadership?

Well, you don’t have to worry too much about the fruit because you are following the leader. And you expect some of the things that have always accompanied Jesus’ leadership. A lot of failure (lots of laughs from the audience here). Truly. Considerable suffering. Betrayal. Rejection. Disaffection. These are….these are very much a part of what happens in Jesus’ leadership. And it‘s hard to see much….much either Herodian or Pharisaic success in what he is doing.

Now, what the other thing to say is….you can expect salvation. You can expect to glorify God. But probably in ways that you aren’t going to notice. At least at the time. It’s really surprising how subtly God works. And how indifferent he seems to be, to be….to the Herodian worldview and the Pharisaic worldview.

So I….I’m not trying to be cute when I say that. I think there is a….there is a sense in which we have to embrace the consequences of Jesus’ leadership, as well as just doing it. And the consequences aren’t all that glamorous. They last. And they are eternal. But they are not ego gratifying. There is very little ego gratification in following Jesus.